As promised, pictures of attempt #4!

Went with one long loaf instead of two small round, followed the same recipe as #3, but changed the process a bit to give more time to ferment. AP flour and starter. 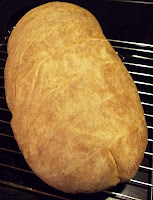