Chicken Little and the Big Scary

I have a love for SmartBitches that is rather like the love an old school doofy-assed TSTL heroine has for her brutal-and-sometimes-rapetastic hero.

I bring this up because with my upcoming debut release, I've been dipping a toe into the review-pool. I have been working with Lisa at Tasty Book Tours, and she's awesome and I'm very grateful for her assistance(took the nerve out of asking for reviewers!). But outside that, there are a few review sites I've been reading for years that I'd love to submit to--IN THEORY. Ones where I load up the submissions page, become terrified, and close it. CataRomance and SmartBitches to name a couple...

The last really can send me into a full-blown, neurotic-bunny flip-out. Panic? Yes. Irrational paranoia? You mean... like where I become convinced that the longer I stare at the submission-focused page, the more likely it is that some brilliant SB-aligned hacker has activated my laptop's webcam and... can see me staring at it with deer/headlights eyes, sheet-wrinkles on my cheek, and staggeringly awful bed head? Yeah, I pretty much do that too. I don't know why I'm always tempted to consider it right after waking up. Maybe I have dreams where I'm totally brave, and then the computer reminds me that insanity is not quite the same thing as bravery... and I quickly close the danged tab.

So far, my review-getting experience has been very positive, but all review-soliciting comes with the inevitability of unhappy words being written about poor MountainMan. It's a given, someone will hate the book. Actually, they'll probably hate the heroine--she's kind of a handful at times. Someone(possibly many someones) will hate the book. Period. End of story.

I know this. I have accepted this. I feel I'm more or less prepared for the eventuality. I have an emergency-bad-review-boogie-bag, complete with dark chocolate, deluxe mixed nuts, and tissues to vanquish looming sniffle-snot-bubbles. But for some reason, there are review blogs I just can't bring myself to submit to yet for no real reason other than I'm totally a chicken. SmartBitches is right at the top. No idea what to do about that. I'm hoping that will eventually work itself out of my system.

Until then let me say: Bock-bock. Bock.
Posted by Amalie Berlin at 10:04 PM No comments:

The first book of those three will be my ridiculously working-titled: Circus Medicus. I thought about calling it Three Ring Love Affair, but that sounded distinctly ménage... and maybe a little kinky for category romance :)  I'm currently in the part of the writing process that I hate: the first three chapters. So slow. SOOO SLOW. Can't wait until I get to the middle, when it's all I can do to keep up with the mayhem and don't have to work at throwing out plot threads while keeping the reader interested.

Luckily, Author Amendments for book2--Uncovering Her Secrets--also came today! Just in time. I needed a break from the current WIP. So I've just finished printing them and have my highlighters and many-colored ink pens for making any corrections needed.

And I like to put in pictures, but since the only interesting pictures I've had lately have been frog-related: I re-share one and add a second one of the tiny frog who has been hunting in my kitchen window. See the hair on his bum? That's because he tried to get away from me by jumping onto the cat's bed... and it stuck to him since his skin has the general consistency of a Wacky Wall Walker.

I was going to hold off writing about SYTYCW until a little later, when the contest was in full-swing, but I discovered tonight that my last year's SYTYCW entry is actually available for download on Harlequin.com! That's exciting for me. I don't actually know how long it's been there, I have been obsessively checking the print store, figuring that having the print books in stock would be the delay in actually having the book up for purchase, but not so! (Print is still not available, alas.)

So to mark the occasion, I thought I'd do a little recap of the journey to publication.

The first time I decided I wanted to write a book was in 2005... or maybe 2006. I don't have much of a grasp of time. I sat down and pounded out a truly horrendous manuscript in about two weeks. I was very proud of myself until I read it and then I promptly stuffed it into a drawer and it has never seen the light of day. (And never will.)

Fast-forward: In 2010, inspired by the success of friends, I decided that publication was actually something that could happen to regular people, and gave it another shot. I should probably pause here and say that although I had not been writing books/stories during that time, I had been writing every day since about 1998 for fun. I am a former MUSHer, which is online, text-based roleplay(or in everyday vernacular: Interactive Storytelling). My voice was well established by this point, but my storytelling skills needed work.

My first submission in 2010 resulted in a full manuscript request(and voice probably got that). The book had not been written(which had been okay'd by the editor prior to submission--back when neither of us knew how long it would take me to write the full), and I didn't get a version I was anywhere comfortable sending in until almost a year later. When I sent it in, the editor who'd requested it had retired, and I have no idea where it went. I checked up at six months, and then again at nine, Still Under Consideration was the response. In the meanwhile, I had gotten more comfortable with How To Build a Novel, so I entered another Fast-Track and got a Form-Rejection on it, entered a pitch(with the book that is actually now on sale--MountainMan!) and didn't get selected to pitch, had entered New Voices and SYTYCW for two years running and got nowhere, and then I got a big Fat-Form R on the full manuscript requested in 2010(which turned out later to have been an error), a few other Big Fails that left my confidence very shaky.

Added to this, I am a quirky writer--my voice tends toward irreverence and I like off-the-wall scenarios. I was not at all certain I could write category. As a matter of fact, by summer 2012, I was pretty-darned certain I couldn't. I'd decided to stop submitting to Harlequin for the time-being--focus on epublishers, learn more, and maybe try it again later when I was no longer convinced my Level of Suck didn't need to be measured on the Fujita scale.

Then I found out the 2010 full manuscript Form-R was an error. Got revision notes on it. My confidence was still in tatters, but I had one thing going for me and I was just going to focus on that one thing, the 2010 story. By the time SYTYCW2012 rolled around, I had decided not to enter it. Until about the day or two before, when my CP's(Michelle Smart and Aimée Duffy) talked me into entering. I had no story written, and the only fully formed story I had in mind that had never been submitted to Harlequin was MountainMan. So with a first chapter I'd written in the Spring in hand, I uploaded it to the site and dove in to write the rest of the book. I reached The End at like... 4am the day they were going to post the Top 28(semi-finalists), just in case. But again, I was not in the semi-finalists. Unlike the other contests, I didn't expect or even really let myself hope I'd be there. I was just using the contest deadlines to give myself hard-fast dates to get a book done by. And I'd done it. So yay me! I revised a the first half, then stuck it away and went back to revising the other book.

Friday -- Nov 9, the day after my birthday, I got an email from Suzanne Clarke, Medical Editor, asking to see the full manuscript. I emailed back saying I only had the first half revised, and could I wait to send it in when I got the second half revised. She emailed back asking for whatever I had polished.

Monday -- Nov 19, Got revision notes on first half (Which were rather epic if enthusiastic)

Tuesday -- Nov 20, emailed back to thank her and set a Dec 7 deadline for the revised full

Friday -- Nov 23 -- Suzy emailed to ask for first three revised chapters earlier, if possible. I naturally, agreed and set another close date to send them by.

Thursday -- Nov 29 -- Sent the revised chapters 1-3 again because after sending on Wednesday, I had been filled with irrational word-hate and felt like it was a big ole mess of stupid. And that feeling disappeared after I chopped a paragraph that served no purpose beyond making me laugh. Whew. (Also, probably the first sign for editor that I'm a bit of a neurotic mess).

Thursday -- Dec 6 -- One day before deadline(Yay). I sent in the revised full.

Tuesday -- Dec 18 -- Received another round of revision notes. Again, fairly epic in scope.

Christmas and New Years derailed progress for rest of December.

Monday -- Jan 7 -- Contacted Suzanne to propose Jan 18 deadline for revisions, and she said sure!

Thursday -- Jan 24 -- Actual date I managed to send in revisions. They were hard, man.

Then I spent time with the Crickets of Scary Silence.

Wednesday -- Feb 20 -- Email asking if she could call in the afternoon. I said sure, but then promptly missed the call. Emailed, rescheduled for next day. I THOUGHT I knew why, and when I told my CP's about the email, they were sure of the reason -- but I was still pretty sure that it could just be that I'd totally crapped up the revisions and she had to talk to me on the phone to make me understand where I went wrong :)

Thursday -- Feb 21 -- Germs conspired to keep her out of office, rescheduled for Friday.

And now, the Frootz of All That Labor:

Posted by Amalie Berlin at 3:33 AM No comments:

Will have a Rafflecopter set up for the tatted jewelry prize pack(with gift card and copy of Craving included!), as well as several copies of the book along the way.
Posted by Amalie Berlin at 1:57 PM 2 comments: 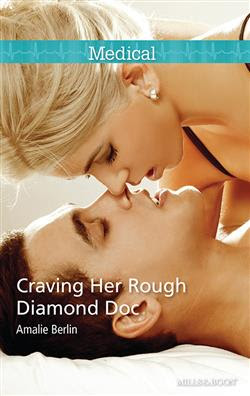