So, with the upcoming release of my debut (yay!), I am spending this week tatting up something glorious(at least in my mind) to give away on the blog tour. It's also a good way to let my mind wander into new-story land and come up with the next ideas.

Right now, here are the necklace ideas I'm kicking around. Note, these are prototypes, so they are not flawless. Also, they're made with my first attempts at dying my own thread :) I've gotten better! 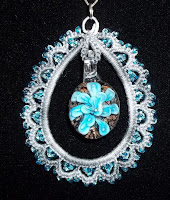 And now for the other newsy stuff. My editor who I've been working with for both books1 and 2 at Harlequin Mills&Boon has had to change up her position, and I'm starting over with a new editor. I've heard loads of lovely things about New Editor, so I'm very hopeful. If I'm honest, I have to say I'm a little scared too. I like to use unusual settings, people, and scenarios in my stories, and I think half of editing my stories involves making me tone down the humor that wants to overpower other emotions. My first editor just got me, is it egotistical to fear the next one won't? Like I'm some special snowflake who no one can possibly understand! It's irrational, I'm sure it is. But there it is: SKEERED.

Because the next medical I want to write is set in the circus. And at a glance, that idea seems to be slathered in crazysauce, but I swear I'm not making it crazy on purpose. I really have a whole, fully formed idea! Complex characters who may be a hot mess, as I like them. And it's not just an excuse to write some steamy sex on the bouncy-bouncy net below the trapeze. I SWEAR.

But, I'm a whiner and a worrier, and I think that goes hand in hand with being a writer. We have great imaginations, so we can really picture all the way things can go badly when we toddle out on the limb. I'm sure it will be fine.

Let me try that again I'M SURE IT WILL BE FINE. If you say things louder, they become truer.

Votes on necklace to pursue for blog tour giveaway? I'm thinking the pendant, with matching earrings, and possibly a bracelet if I can come up with something. The necklace also has matching earrings, and they are actually probably better than the necklace. But, that's why there's prototypes! (Also, the set will probably be black. I was leaning toward purple--since my UK cover is all purple awesomeness, but now I'm thinking black goes with everything. Not everyone likes purple--can you believe that? Will see what my trip to the geegaw shop brings today to know for sure what thread I'm tackling. Might be shades of grey!)
Posted by Amalie Berlin at 10:51 AM